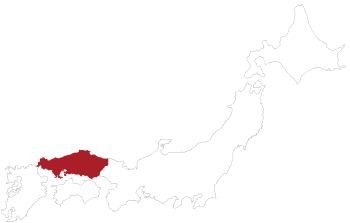 The Chugoku Region makes up the western part of Japan's main island Honshu. It is commonly subdivided into the heavily urbanized and industrialized Sanyo Region along the Seto Inland Sea coast and the much more rural Sanin Region along the Sea of Japan coast.

Matsue is the center of the administration and economy of Shimane located in the eastern part on the Matsue Plain surrounded by the Lake Shinji, Nakaumi Lagoon and Shimane-hanto Peninsula. The Ohashi River runs through the center of the city, and a network of canals and rivers makes Matsue a city of water. The water network was created for military reasons when the Matsue Castle was constructed in 1611. Today, pleasure boats cruise through the waterway. The Matsue Castle has the only remaining castle tower in the San-in Region (on the Sea of Japan). There is a view spot in the castle tower that commands a view of the Lake Shinji and Mt. O-yama. The wooden Western style building, Geihinkan Guest House built in the early 20th century is now a provincial museum, and the site where the castle once stood has become a Shiroyama Park offering a relaxing and recreational area to the people of Matsue.

Tsuwano, located in the westernmost part of Shimane Prefecture, is a small castle town which prides itself on traditional arts, crafts and literature. It developed along the Tsuwano-gawa River and surrounded by nature, and is also called "Little Kyoto" in the San-in region. Near Tono-machi in the center of the town, there are streets lined with neat rows of stores and houses, including sake breweries with lattice doors and Japanese sweets stores, and also samurai residences and storehouses with white mortar walls remaining as they were in the 17th century. You can find koi, carps of various colors swimming in the waterways along the streets in Tono-machi. The carps in Tsuwano were first kept in the waterways built for irrigation and fire prevention, as emergency provisions in case of famine, in the period from the 17th century to the 19th century. On the second Sunday of April, Tsuwano holds its own yabusame horseback archery event under the cherry blossoms.

Kurashiki is located in Okayama Prefecture, just beside the prefectural capital of Okayama city. The beautiful streetscape of storehouses and merchant homes south of JR Kurashiki Station was selected as an Important Traditional Structures Conservation Area by the Agency for Cultural Affairs, and it is still protected as such today as the "Bikan Chiku" historical area. In fact, the name "Kurashiki" literally means "town of storehouses". The Ohara Museum of Art is also located here and, with its worldwide famous collections including pieces by El Greco, Gauguin and Monet, is the first museum of western art in Japan, attracting a constant stream of visitors from both home and abroad. In the Bikan Chiku historical area, two small boats are always combing the river where, during the daytime, visitors can enjoy a view of the riverbanks while experiencing a gondola-style boat ride. When it gets dark, the streets are gently enveloped by soft illumination, making the area enjoyable at night time as well. The Bikan Chiku area, which houses the Ohara Museum of Art and beautiful, historical buildings, is growing as one of the greatest tourist spots in the prefecture, a unique cultural city in Japan.

Okayama is the capital of Okayama Prefecture, and the largest city in the Chugoku Region after Hiroshima. It is the center of administration and business for the prefecture and a crossroads for traffic between the San-in region and Shikoku. The city is an important transportation hub, the Sanyo Shinkansen meets with the only rail connection to Shikoku. The city originally developed as a castle town during the Edo Period (1603-1867). Okayama Castle, the Koraku-en Garden (one of the three major gardens in Japan), and a number of art museums and science museums are found here. Okayama Castle was built in the 16th century. The castle tower has been rebuilt, but the Tsukimi-yagura turret and other structures are original. The Koraku-en Garden, which took 14 years to complete in the 17th century, was the first lawn garden in Japan. The garden is 133,000 square meters, and visitors can view Okayama Castle.

Hiroshima City, facing the Seto Inland Sea, is the most prominent cities in the Chugoku region, and a center of the administration and economy of Hiroshima Prefecture. Six rivers flow through the city, so it is often called the "City of Water." It was devastated by an atomic bomb in World War II. All of the buildings in the surrounding area were destroyed. Hiroshima, where the Hiroshima Atomic Bomb Dome (Genbaku Dome) miraculously remained standing, is internationally known as the "City of Peace." Hiroshima also offers a number of gastronomical pleasures, including oysters that are said to have been cultured there since the 16th century, and Hiroshima-style 'okonomi-yaki,' unique flour crepes fried with vegetables and noodles that are slightly different in flavor at each restaurant.

Peace Memorial Park / A-Bomb Dome was built by Hiroshima, the first city to suffer an atomic bombing, to symbolize its wishes for everlasting peace. Of particular note are the Peace Memorial Museum, the Memorial Cenotaph and the Flame of Peace. Ruins of the Industrial Promotion Hall have been preserved , just as when it was bombed, to be a reminder of the tragedy, It is popularly called the A-Bomb Dome. In December 1996, the A-Bomb Dome was registered as World Cultural Heritage.

Miyajima Island is the popular name of Itsuku-shima Island, located in Hatsukaichi City in southwestern Hiroshima. It is a scenic site in which the mountains, sea, and red shrine buildings blend together in harmony, and the entire island is designated as a historic site. It is said to be one of the three most beautiful sights in Japan, along with Matsushima in Miyagi Prefecture and Ama-no-hashidate in Kyoto. As the name implies, Momiji-dani Park, or Maple Leaf Park, where the Momiji-dani-gawa River flows, has many maple trees, and is a famous spot for viewing autumn leaves. You can climb Mt. Mi-sen from there by ropeway or on foot along a climbing path. From the mountaintop, you can enjoy the beautiful scene of the numerous islands of the Seto Inland Sea. There are bathing beaches with camping grounds around the island. Another must-see is the Miyajima Public Aquarium, where some 13,000 fish and 350 kinds of aquatic animals are exhibited.

Located in the middle of Yamaguchi along the coast of the Sea of Japan, Hagi is a former castle town, off the major transport ways, along the tranquil Sea of Japan coast in Yamaguchi Prefecture. Hagi is best known for its nicely preserved former castle town and local pottery, which ranks among Japan's finest. The Hagi Castle Ruins, on which some portions of the castle walls and stone walls remain, is open to the public and today called Shizuki-koen Park.

Yamaguchi City is located nearly in the center of Yamaguchi Prefecture, and is the center of the local administration and economy. Built in the middle of the 14th century by a warlord Ouchi family in the imitation of Kyoto, Yamaguchi City is often referred to as the Western Kyoto. There are many popular sites in the city such as longstanding temples including Ryufukuji Temple, Toshunji Temple, and the Sesshu Garden designed by Sesshu: the most outstanding ink painting artist of Japan. While you are in Yamaguchi, it is recommended to experience the steam locomotive SL Yamaguchi, running between Shin-Yamaguchi Station and Tsuwano Station on JR Yamaguchi line.