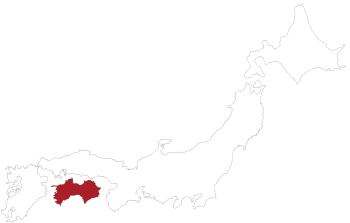 The Iya Valley region is a scenic area known for its dramatic mountain valleys and old vine bridges. Situated in the western part of Tokushima and nearly in the centre of Shikoku, the Iya area is one of the large "hidden mountain regions" in Japan. Although access has improved in recent years, the Iya Valley and the inner parts of Shikoku have historically been remote and difficult to enter. In modern times, the Iya Valley has become an increasingly popular tourist destination. Deep in the bosom of Mt. Tsurugi-san, the second tallest mountain in Shikoku, the region is surrounded by mountains in the Shikoku Mountain district, with a deep valley formed among the mountains cut through by the Iya-gawa River, a tributary of the Yoshino-gawa River. The vine bridge over the Iya-gawa River, called "Iya-no-Kazura-bashi," is a 45 meter-long and 2 meter-wide suspension bridge with a height of 14 meters from the water level. Designated a national important folkloric property as one of Japan's three rare bridges, the bridge is rebuilt every three years.

Tokushima City is the prefectural capital of Tokushima Prefecture on Shikoku Island. The city's main tourist attraction is the Awa Odori, a highly popular, annual dance festival held during the Obon season in mid August. The Awa-odori Dance is known for throughout Japan. The 400-year-old dance is currently also performed outside the prefecture, and the dancers have been invited to perform at overseas events. The Awa-dori Dance is considered to be as passionate and international as Rio's Carnival. Therefore you may find yourself joining in on the fun. In case you missed the event, the Awa-odori Kaikan Hall in the centre of the city is open for you to experience the Awa-odori at any time of year. If you wish, you can dance there. In Tokushima, you can also visit the famous giant Naruto whirlpools, just off the city on the shore of Naruto strait.

The Naruto whirlpools occur on the Shikoku side of the Naruto Straight, and are created by the large volumes of water moving between the Seto Inland Sea and the Pacific Ocean between high and low tide, combined with the unique underwater geography of the narrow straight. According to the change of tides, the whirlpools occur roughly every six hours and can typically be seen once in the morning and once in the afternoon for an hour or two. The whirlpools vary in size, depending on the intensity of the tides. They tend to be larger in summer than in winter, and are largest during spring tides, which occur every two weeks. If all factors play together favorably, whirlpools of up to 20 meters in diameters can be observed. On the other hand, there is not much to see on calm days or outside of the peak times. Therefore, it is of great importance to check the whirlpool schedules before making a visit to Naruto.

Kotohira is a small town in Kagawa Prefecture, which is famous for Kompirasan, Shikoku's most popular shrine. Kompirasan is dedicated to seafaring, and is said to have one of the most difficult shrine approaches in Japan. Nearby is the historical Kanamaruza Kabuki theatre.

Takamatsu, facing the Seto Inland Sea, is the capital of Kagawa, Japan's smallest prefecture. It is the centre of the administration, economy and culture of Shikoku. The city's port used to be the main entry point to Shikoku Island until the opening of the Seto Ohashi Bridge in 1988. For many visitors Takamatsu is the gateway to Shikoku; the large, breezily modern city on the northern coast is major transport hub roads, rail and ferry traffics from Honshu across Shikoku Island. Takamatsu is home to Japan's largest garden, Ritsurin-koen. Ritsurin-koen is a fine example of landscaping, borrowing the pine-clad scenery of Shuin-zan and blending chestnut trees, lotus ponds, arching red bridges and artificial islands. Another attraction is Mt. Yashima, a 293-meter high lava plateau that juts out into the Seto Inland Sea. It is situated at the Bisan-Seto area, famous for its beautiful scenic view of the islands on the Seto Inland Sea. The view from the top is magnificent and attracts many visitors who come to enjoy the sunset or the night view of Takamatsu.

Ritsurin Garden is a landscape garden in Takamatsu City, built by the local feudal lords during the early Edo Period. Considered one of the best gardens in Japan, it is often suggested that Ritsurin Koen deserves a spot on the list of the "three most beautiful gardens of Japan" alongside Kanazawa's Kenrokuen, Mito's Kairakuen, and Okayama's Korakuen. The spacious park features many ponds, hills, historic trees and beautiful pavilions divided into a Japanese style garden in the south and western style garden in the north. The gardens are set in front of wooded Mt. Shiun which serves as a wonderful background and great example of borrowed scenery.

Located in the centre of Ehime and facing the Sea of Iyo in the Seto Inland Sea, Matsuyama is the largest city and the centre of administration and economy on Shikoku. On the hill in the centre of the city stands Matsuyama Castle, the symbol of the town. The castle and its surrounding area as a whole constitute a historic site park. A 6-minute ride on a ropeway and lift takes you up to the mountain's top, where the ridge has been leveled. From the terminal of the lift, there is an ascent path to the castle and its tower. If you go up the steep wooden stairway to the top floor in the castle tower, the panoramic view includes Mt. Ishizuchi and the Sea of Iyo.

Uwajima is a small historic city, situated deep inside Uwajima Bay, on the west coast of Shikoku and embraced on three sides by mountains more than 1,000 meters high. The city has flourished as a castle town of the Date family since the early 17th century. In the centre of the city, there are Uwajima Castle, Uwatsuhiko-jinja Shrine, and other sites. The Tensha-en Garden built as a retirement palace for the Date family, is especially beautiful in the wisteria and iris season and admired by many local people. You can see bullfights, a traditional 300-year-old event in Uwajima. The events are held five times a year even today. Bulls weighing about one ton butt against each other in a 20-meter-diameter ring in a domed bullfight arena. The bulls fight until one loses its fighting spirit.

Dogo Onsen is one of Japan's oldest and most famous hot springs, located to the east of central Matsuyama. The area is popular with tourists for its beautiful bath house and many ryokan. Dogo Onsen has also been a frequent destination for Japan's most prestigious guests, the imperial family. The main attraction in Dogo Onsen is the Dogo Onsen Honkan, a Meiji Period wooden public bathhouse, dating from 1894. The interior of the building is a maze of stairways, passages and rooms, all of which bustle with bathers and staff. It is said to have served as inspiration for Miyazaki's popular animated film "Spirited Away".

Ishiteji, literally meaning "stone hand temple" due to a local legend, is number 51 of the 88 temples on the Shikoku Pilgrimage. It is also Matsuyama's most famous temple, located near Dogo Onsen. Pilgrims dressed in white are a frequent sight at this large temple to the northeast of Matsuyama's city centre. The sprawling temple grounds boast several different halls, a three-storied pagoda, along with various statures and small buildings on its grounds. A treasure house displays some of the temple's most important artefacts.

Kochi City is located on the Kagami-gawa River delta, at the head of Urado Bay. The city is the political, cultural, economic, and trading centre of the prefecture. Kochi Castle dominates the centre of the city, and Harimaya-bashi Bridge is famous for its red lacquer railings, which are retained to this day. There are also several famous ruins within the city itself. Obiya-machi is an arcade, which runs through the city, and Kyo-machi is a shopping street with many shops selling high-quality decorations made from coral. The city's trams are affectionately known as "Toden" and are a favorite method of transport for citizens of Kochi and visitors. At Urado Bay in the south of the city is Katsura-hama Beach. This spot is famous for the pleasant contrast between the beach's pine tree forests and rocky coastal scenery.